Juan and his father, Marcos Pu Chacaj, at the Shriners Hospital for Children in Boston, where Juan has been a patient for the past several weeks. 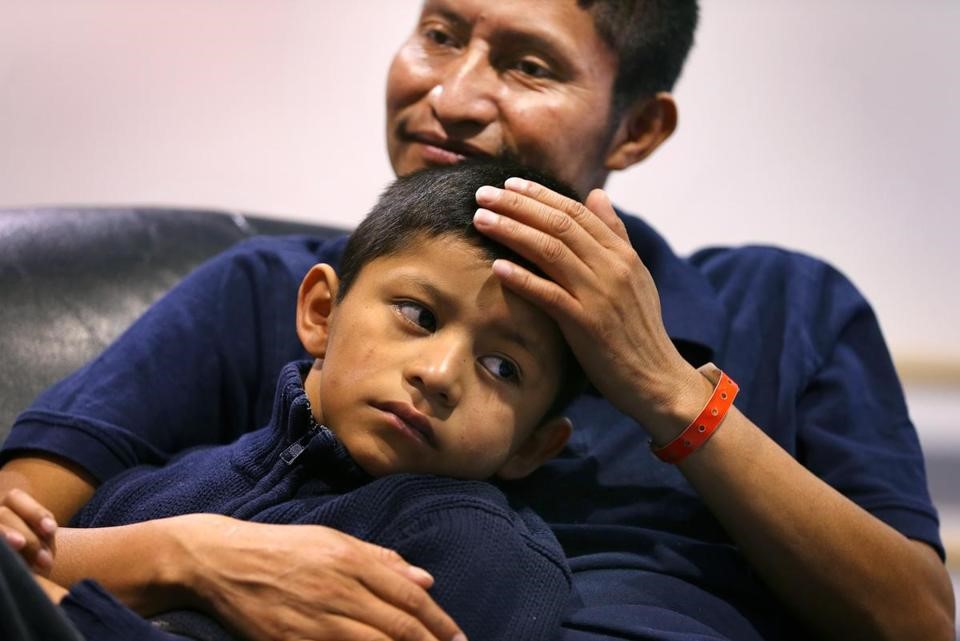 
Beautiful and bashful, the little boy settles into his father’s lap, as ever, a warm and safe and familiar cocoon.
He’s 2,200 miles from home, away from his mother and his three brothers, but in Boston he’s found a place to heal in the masterful hands of miracle workers at Shriners Hospital for Children.
And he’s with his father, the man who holds his hand, who assures him that everything will be all right — the man who blinks back tears as he tells his 8-year-old son to chase away a guilt that’s nearly as painful as his wounds.

“He tells me, ‘This is my fault. This is why you don’t have the money anymore,’?” Marcos Pu Chacaj said, his arms around the child who clings to him. “I tell him, ‘You don’t have to worry. God will provide.’?”

But the little boy does worry. And he can’t erase the searing recollections about what happened to him last year — the day he came home from school and, while playing with a cousin, tripped into a large pot of scalding water, boiling over an open fire while his parents were away gathering wood.

“We live in a humble house,’’ Marcos told me through an interpreter on Thursday morning. “And in our country the hospitals are not great. I had savings and I was planning to buy a plot of land.’’
But that money, some $6,700, is gone now, spent to pay for fruitless treatment.

“They gave him a couple of tubes of cream and sent him home,’’ said Catherine Bartlett, a retired Northampton pediatrician who first saw Juan just after Thanksgiving last year in San Marcos in western Guatemala, where she was volunteering at a clinic for a California-based nonprofit group that provides medical aid in developing countries.

With Bartlett’s help, Juan obtained a visa and came to Boston earlier this year and to Shriners Hospital, where almost 40 percent of admissions are international patients who receive care regardless of their ability to pay for it.

Skin grafts on his buttocks have been successfully completed. Next week, doctors will turn their attention to his feet, terribly burned and malformed when boiling water pooled in the boy’s boots.
“His toes are pointing in the wrong direction and we’ll make them go in the right direction,’’ said Dr. Rob Sheridan, director of the Shriners burn unit. “Every burn is a big burn if it’s yours.’’

Doctors are confident that Juan’s physical wounds will heal. He could be back home within six weeks or so.
“The doctors here have been amazing,’’ Marcos said. “We pray that God will guide the doctors’ hands.’’

In the meantime, much-needed emotional support has been assembled. A team of psychiatrists, psychologists, music therapists, and other specialists will help. They’ll try to chase away the fear, the sadness, and a guilt that won’t quit.

When I asked Juan how he is feeling, he answered softly: “Bad.’’
Why? “Because of the money,’’ the boy said.

“I left my family with nothing and I’m just waiting for God’s will,’’ Marcos told me. He’s three months behind on his rent back home. He doesn’t know if his job will await him upon his return. He misses his family, with whom he speaks with some regularity because of the cellphone that’s been donated to him.
“Whenever I tell my story, I feel like crying,’’ he said. But he doesn’t.

For now he’s in Boston, attending to his son and taking walks in an unfamiliar city where he sometimes gets lost, asking helpful strangers on the street for directions back to the hospital and back to this son.
“My son’s health is the most important thing to me,’’ he said. “He’s just a boy, and I want him to be happy.’’

The doctors at Shriners are working to make that happen. And so is the father, who hugs the little kid in the Spider-Man slippers — the 8-year-old boy who smiles as his dad holds him closer.
Thomas Farragher is a Globe columnist. He can be reached at thomas.farragher@globe.com.